Settle ALL THE PLACES!!

As you know, it was my birthday about a month ago and among the meeting up with friends, I got some pretty cool presents. However, my favourite (well, tied favourite with The Fault in Our Stars) and definitely the most well used was the board game Josh got me: Settlers of Catan.
If you haven't heard of Settlers of Catan before then 1) I insist you find a way to play it as soon as humanly possible (although faster would be preferable) and 2) here is a brief summary:
The goal of Settlers is to be the first to reach 10 victory points. You gain these points by building settlements, upgrading your settlements to cities, having the longest road, having the largest army (made up of knights which are a type of development card) or from a development card that specifically says "1 victory point". (As well as being knights and victory points, development cards can also give you other bonuses such as building two free roads, gaining two free resource cards or taking resource cards off other people.)
You build roads, settlements and cities and buy development cards by trading in resource cards in specific combinations of sheep, wheat, rock (well, technically ore but we never call it that), brick, and wood and these resource cards are gained depending where your settlements are on the board and what number is rolled on the die. 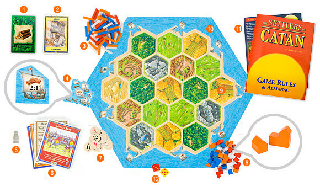 1) Resource card
2) Development card (here giving you 1 VP)
3) Roads
4) Example of a port where you can trade resource cards if you have a settlement next to one
5) The robber. It is moved when a 7 is rolled or when a knight is played and blocks a hex stopping the adjacent settlements from recieving the resource cards
6) The cards showing how much everything costs and the cards to indicate who has the longest road or biggest army
7) These numbers go on the hexagons and when that number is rolled, the resource of the hex can potentially be collected
8) The smaller one is a settlement, the larger, more church like one is a city
9) A hex. Different ones indicate different resources. For example, this one indicates wheat
10-12) Pretty self explanitary... the board... the rule book, the die...

Anyway, after that not so brief summary, I would definitely recommend playing it. I was introduced by a friend a couple of years ago and since my birthday, everyone I've introduced it to has loved it. It my have a similar sort of concept as Monopoly but Settlers is just hands down better. You still take turns to build and roll the die but you can still collect resource cards when it's not your go, you can still trade cards with whoever is having their turn and your plan can be changed drastically when it's not your go. You can't just pop off to the loo quite so easily without missing anything and it requires a lot more skill and planning than Monopoly. Furthermore, it is much quicker. Monopoly has been known to go on for over 2 hours with people getting so bored once the initial gaining of properties has been passed. However, Settlers requires you to keep focused, pay attention, and a game is usually under the 2 hour length. It's not always clear who will win and things can change drastically with even just the placement of one more settlement in a good place.

Basically, I am obsessed with a great game. I think I've played on average almost once a week since my birthday where possible and I'm still not fed up. Each game is different and different tactics lead to a win each time. Additionally, the flexibility of the board means you can change it so the "best" places on the board are different each time.

I think if I say much more it'll be overkill so I just have one word: PLAY.

Live long and keep blogging =]
plucked out the brain of Unknown with normality restored at 11:20 pm

Email ThisBlogThis!Share to TwitterShare to FacebookShare to Pinterest
Click-able, misused labels thank you Josh for an awesome birthday present

Where are you reading this from?